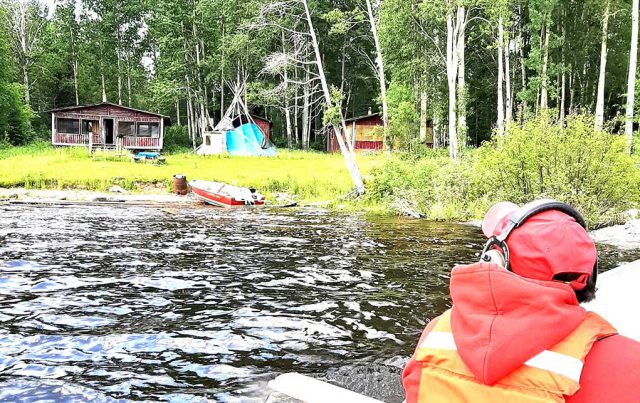 Canadian Rangers in an isolated First Nation in Northern Ontario successfully joined forces with the Ontario Provincial Police to rescue a stranded fisherman after his boat engine broke down.

The fisherman, Jericho Beardy, 25, had gone by boat to his hunting camp, for a day’s fishing but did not return as expected to his home in Kitchenuhmaykoosib Inninuwug, a remote Oji-Cree community about 580 kilometers north of Thunder Bay, that is often referred to as KI. His camp is about 20 kilometers west of KI.

The fisherman‘s family alerted the local Rangers, who are part-time army reservists with a patrol in KI, and the OPP detachment in the community. A helicopter leased by the OPP for emergencies was in KI and it flew to the hunting camp with Ranger Sergeant Spencer Anderson and OPP Constable Darryl Sainnawap, who is also a Ranger, on board.

“We got to the camp but we couldn’t land because there was no area clear enough for us to get down,” said Sgt  Anderson. “He waved to us and held up a fuel can. He might have been letting us know he was out of gas but we could also see the cover on his boat engine was raised, so maybe he had engine trouble. The important thing was he seemed to be all right physically.”

Unable to land, the helicopter and its passengers flew back to KI. Sgt Anderson and Ranger Corporal Craig Sainnawap left shortly afterwards to go to the hunting camp by boat, taking tools and extra fuel with them.

“He was very pleased to see us when we got to his camp,” Sgt Anderson said. “He had engine trouble, a mechanical problem, and we could not fix it for him. So we brought him back to KI. I offered to take him back to his camp to get his boat when I was going fishing myself in a couple of days. That made him very happy. I also told him he should join the Rangers and I think he’s maybe going to do it.’

A joint command post was established for the rescue mission at the KI OPP detachment office. Corporal Harriet Cutfeet manned it for the Rangers.

“Everything worked out well,” said Sergeant John Meaker, the OPP’s provincial search and rescue coordinator. “The Rangers have excellent local knowledge of their areas.”

Sergeant Peter Moon is a Ranger with the 3rd Canadian Ranger Patrol Group at Canadian Forces Base Borden.