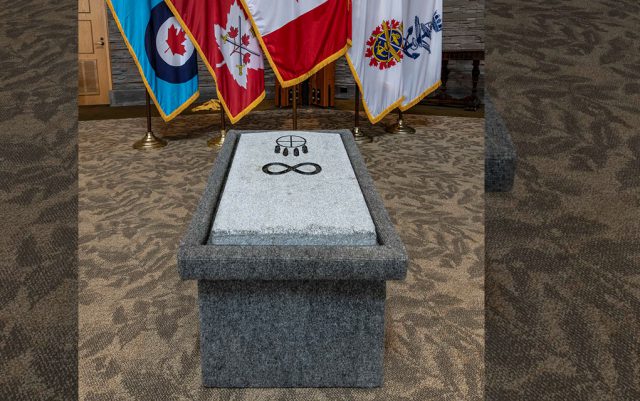 The Canadian Armed Forces (CAF) unveiled the first two symbols representing Indigenous spirituality for military headstones during a solemn ceremony at the National Military Cemetery (NMC) at Beechwood Cemetery in Ottawa on June 21, 2022.

During this event, the Commander of the Canadian Army and Defence Team Champion for Indigenous Peoples, Lieutenant-General (LGen) Jocelyn Paul, had the honour of revealing the designs of the two Indigenous spirituality symbols. He was accompanied by several participants, including the family of late Corporal Justin Quesnel, the first CAF member to have the First Nations spiritual symbol engraved on his headstone. LGen Paul is currently the most senior-ranking Indigenous member of the CAF.

The First Nations Medicine Wheel and the Métis Infinity symbol are now part of the eleven religious and spiritual symbols approved for engraving on military headstones at the NMC. In the same spirit, it was also announced during the ceremony that it is now possible for Indigenous CAF members, Veterans, and their next of kin, to request that their Indigenous name be engraved with their spiritual symbol on their headstone at the NMC.

This initiative is the result of a collaborative process between agencies of the Government of Canada and Elders from various Indigenous groups. The selection and consultation processes were designed with the upmost respect to ensure that appropriate signs would be selected. It was important to make this change in order to personalize the final resting place of Indigenous CAF members and Veterans, and to better represent their identity and spirituality.

During the ceremony, LGen Paul shared what this addition to the CAF religious and spiritual symbols meant personally to him as an Indigenous CAF member. He also spoke about the Indigenous service members who fought during World War II that he met when he was a kid as well as highlighted the historical role of the Indigenous People in the CAF throughout history.

Consultations with Elders and stakeholders are currently underway to determine the appropriate approach to represent the Inuit spirituality as their approach to grief is different than that of First Nations and Métis.  Elders explained that, as life in the North can be quite challenging, it is important for survival that life goes on, so the question warrants more discussion before a decision can be reached.