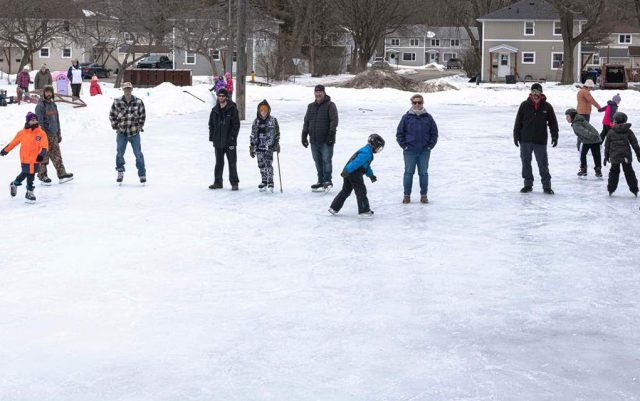 It has been a difficult time over the last two years. We have been forced to keep ourselves in a semi-secluded lifestyle throughout the pandemic greatly altering the norm we once knew. With gyms and recreation centres closed, organized sports cancelled and the constant disruptions to our daily lives, it became increasingly more difficult to stay active and physically fit. Instead of using this as an excuse to develop an inactive lifestyle, it fuelled me to ensure my daughter did not feel the same strains.

When my family was posted to CFB Borden in January 2021, I noticed there was a large snow hill in the centre field that my daughter would love to slide down. I took out my snow blower and began to make a sliding path down the hill, when a teenager approached me asking me if I was able to make an ice rink. I thought, why not? I started blowing out a section when my neighbours came over and asked what I was doing. They had some experience and decided to hop on board. Within an hour, another neighbour came over with his plow to help build the walls. It wasn’t long after that when yet another neighbour came out to offer help with water supply.

In a matter of hours, five neighbours from the loop came together and worked countless hours for weeks outside to create a decent ice rink for the neighbourhood that lasted about a month. As soon as it began to melt, we started to talk about how we were going to build the next year’s rink bigger and better.

As soon as Mother Nature blessed us with one week of freezing temperatures this winter, the hoses came out again. During the first few days of making the new ice rink, two men became ill with COVID-19, leaving a large strain on the volunteer group. Without skipping a beat, two more neighbours stepped up to the rink and spent nights working hard to ensure the 60’ by 150’ ice rink was completed in a week.

Word of the ice rink travelled, and kids from all over the neighbourhood came to skate on it. Knowing how much it meant to them, maintaining the rink became part of our daily routine. With every snowfall we came together to clear the rink, sometimes only a few minutes of work, sometimes hours. The crafty ingenuity of volunteers Sindy Gagnon and Eric Lavoie enabled smooth repairing and flooding of the ice by creating a homemade Zamboni out of household equipment. Each night that we would stay up until 3 am flooding the ice paid off the next morning when we would wake up and see a dozen kids skating already.

It isn’t until the spring thaw begins to make the ice rink disappear that we are able to truly appreciate the benefits it has provided all of us. As far as physical training is involved, we certainly all benefitted from the physical requirements of maintaining the ice. Whether it was shovelling the snow, flooding, or enjoying the ice, it was always a fun, arduous and rewarding workout.

It provided our children a great outdoor activity for free. During a time where many have migrated towards electronic entertainment, it enticed the children to stay outside and active for hours at a time. Many children in the neighbourhood who were in hockey leagues were able to use the rink to fill the voids that cancellations created during the pandemic. Hockey nets, sticks, balls, and pucks were donated from around the loop to ensure that all kids could enjoy playing, even if they didn’t have the kit.

It isn’t long before you notice that the children are looking up to you as mentors and role models. We have received countless thanks from the neighbourhood children for making and maintaining the ice rink. Often when we would be clearing the ice, kids would grab their shovels and try to help us out too. This triggered fond memories of what my parents would do for me when I was a child to be outside and active. Maintaining that image to our children ensures that another generation learns the lesson of hard work, the benefits of it and what us parents will do for our children.

Yes, it was an incredible amount of work to build and maintain the ice rink. But the sense of pride in our creation was a major motivator. There would be cold windy days that most would hibernate through, but without sorrow, we would be out with the hoses to make it smooth again. With each swipe of the Zamboni, we would admire the improvement, motivating us further to put a second, third or fourth coat on the ice, knowing how smooth it will be for everyone to skate on the next day.

Above all, the comradery that was formed from the teamwork required in building and maintaining the ice rink was the biggest benefit. There was rarely a time where one person was working alone on the ice. The bonds that were created through the hours spent together on the rink will be ones that I cherish for a lifetime. Each person that volunteered their time for the ice showed the true ability of self-sacrifice for the benefits of others. There were many laughs late at night, a few close calls when the ice became too slick and a constant reassurance that no matter what, we weren’t alone.

Get outside and make the best out of what Mother Nature gives you. Don’t hesitate to do something similar because it involves hard work. The benefits – both physical and mental – far outweigh the fatigue you’ll endure along the way.