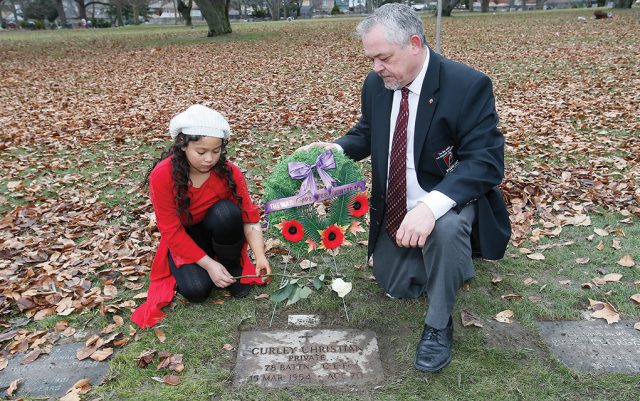 As February marks Black History Month, The War Amps is paying tribute to Ethelbert “Curley” Christian (1883-1954), one of the Association’s founding members and was believed to have been the only surviving quadruple amputee of the First World War.

Christian lived in Manitoba and served with the 78th Battalion (Winnipeg Grenadiers). During the Battle of Vimy Ridge, he was wounded when heavy shelling buried him in a trench. With debris crushing all four of his limbs, he lay on the battlefield for two days before being found close to death. Two stretcher bearers were struck and killed by shells while carrying Christian off the battlefield, but he again survived. Later, in a French hospital, gangrene set in and both of his arms and legs had to be amputated.

While Christian was recovering at Christie Street Veterans Hospital in Toronto, he met his future wife, Cleo MacPherson, who was a volunteer aid. MacPherson noted that it was costly for the government to keep Christian at the hospital and felt that she could take care of him at home. However, it would be a full-time job which meant she would be unable to work.

The hospital director appealed to the Canadian government on the Christians’ behalf, which led to the creation of the Attendance Allowance, a supplement to full time caregivers of wounded veterans. This benefit still exists today.

Christian was also one of the founding members of The War Amps, an organization started more than 100 years ago by amputee veterans returning from the First World War to bring together, support and fight the battles for amputee veterans.

It was these First World War veterans who welcomed the new contingent of amputees following the Second World War, helping them adapt to their new reality and sharing all that they had learned.

Many members of The War Amps considered Christian an inspiration to all amputees and were quick to think, “If Curley can do it, I can!”

“When you are surrounded by others who are accomplishing things, it stimulates you to try,” said Christian. “Today, there are young fellows coming back [from the war] with arms or legs gone. They’re diffident, bashful, frightened. You can never know the misery they suffer mentally as well as physically. At [The War Amps] that vanishes. We’re all among our own kind. We boost each other mentally and we learn things physically.”

Today, The War Amps continues to serve veteran amputees, and all Canadian amputees, including children. Rob Larman, a director with the Association and a leg amputee himself said, “Curley Christian continues to have a legendary status in The War Amps for how he overcame his amputations, particularly at a time when disability was very much a hidden and taboo subject.”

Christian returned to Vimy in 1936 with his fellow war amputees for the unveiling of the Vimy Ridge Memorial.

He passed away in 1954, and in Toronto reporter Gregory Clark’s eulogy of Christian, he said, “After the Vimy battle, Curley Christian lived 37 years a happy man, going to the races, playing gin rummy, attending meetings, speaking and standing forth for his Comrades, an inspiration to all those with lesser fates who might grieve for themselves. Curley never grieved. There was enough of him left to be a man among men.”