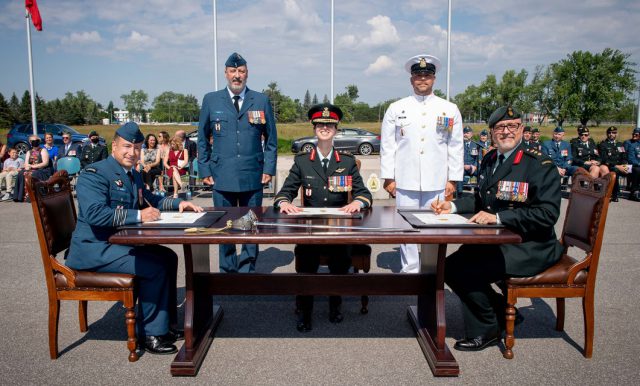 On 22 July, CFB Borden ushered in the next era of leadership for the base and the Military Personnel Generation Training Group (MPGTG).

The outdoor ceremony was presided over by the Commander, Military Personnel Generation Group, Brigadier-General Krista Brodie. BGen Brodie thanked the outgoing Commander, Col Dan Rivière, for his tremendous work in the face of much personal and family sacrifice, recognizing his leadership tenacity, innovation, introspection, and thoughtful approach to complex problems.

“I want to express my sincere gratitude for the honour of leading such a team and unique organization,” said Col Rivière, who assumed command in September of 2020.

In his remarks, Col Rivière thanked the community, leaders, neighbours and partners in Simcoe County, as well as Honorary Colonel Jennifer Armstrong.

“The strength of the Honorary Colonel network in Borden is something never before in my career, so thanks for enabling connections with the community, for truly caring for our members and their morale, and for demonstrating it in very concrete ways, such as what’s being done to facilitate access to housing,” said Col Rivière.

BGen Brodie gave a warm welcome to incoming Commander, Col Jonathan Michaud, who enrolled in the Canadian Armed Forces in 1998.

“I am confident that you are the right fit to succeed [Col Rivière] and add to the legacy of leadership of this historic training base.”

A registered professional engineer, Col Michaud holds a bachelor of science in Chemical Engineering and a master’s degree in Defence Studies. His tours include deployments to Kandahar, Afghanistan in 2006 and 2008, and operation IMPACT in the Middle East in 2019.

“I’m honoured and humbled to join the Canadian Forces Base Borden and the Military Personnel Generation Training Group at such an important time,” said Col Michaud.

“And while our commitment to inspiring, training, and developing a force capable of meeting the demands of tomorrow is of the utmost importance, so will the manner in which we achieve it. Our approach will be inclusive, and will most importantly uphold the values Canadians expect of their military.”

Col Michaud was posted to Base Borden nearly ten years ago and is eager to return to a team with the professionalism, workmanship, and energy he has experienced first-hand.