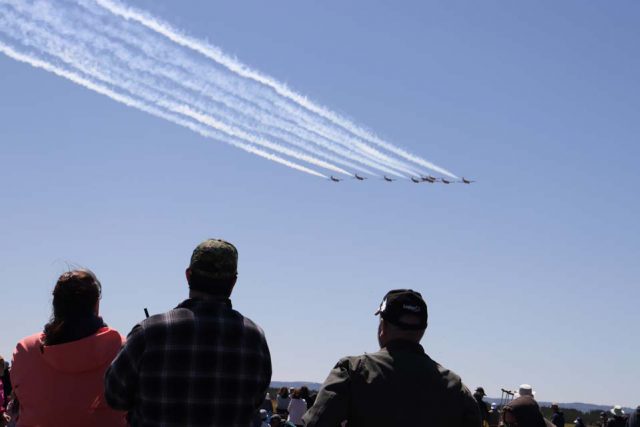 Record numbers turned out for the 2022 Canadian Armed Forces Day & Air Show, presented by BMO, with 54,000 in attendance over the two-day event on Father’s Day weekend, 9,000 more spectators than the previous highest turnout in 2016.

Strong winds caused a slight change to the performance lineup on Saturday, June 18, the SkyHawks skydiving team and Manfred Radius’s sailplane cancelled for safety reasons. Both were able to entertain the crowd on Sunday along with the other performers, including the Canadian Forces Snowbirds who kicked off their 2022 season right here at Base Borden.

“We’re thrilled to be back for the Armed Forces Day Air Show. We have a really exciting show this year with some maneuvers that have been brought back and not seen for some time, but there’s a few new ones this year that’ll be exciting as well,” said Snowbirds pilot Erik Temple. “Military air shows are like a big family reunion.”

“Yeah, it does feel a bit different,” fellow Snowbird pilot Richard MacDougall said about military air shows over air shows for the general public. “It feels like you’re performing more for your family and your friends than for an unknown audience.”

The Snowbirds have since had to cancel performances at other Air Shows while a technical issue that affects the timing for the deployment of the parachutes is resolved.

The Northern Stars Aeroteam also gave crowds something new, performing for the first time as a formation of three aircraft.

“It was more than fantastic, it was absolutely awesome,” said first-time spectator Art Kingston of Barrie, who attended the show with his wife, Sharon, and their family on Saturday, June 18.

“The grandkids loved it!” said Sharon Kingston. “It was really entertaining. We just heard about it and thought it would be a great thing to come out and bring the grandkids. Our son and daughter-in-law had never been out either, so it was great. We really enjoyed it.”

In addition to the family fun at the Kiddie Comando obstacle course, inflatables, and static displays where people could check out the insides of various military vehicles and aircraft, the Brewfest competition provided fun for the 19+ crowd. The craft beer competition had participants vote on their favourite locally-made brews, crafted exclusively for the Canadian Armed Forces Day & Air Show.

Congratulations to Katalyst Brewing Company, who received the most votes of the five participating local breweries! Based in Bracebridge, Katalyst’s winning brew was Vacation Voucher, named as a nod to the founder’s cancelled vacation plans at the onset of the pandemic. It will be featured on tap at CFB Borden Messes for the remainder of 2022.

The record turnout helped CFB Borden make a donation of nearly 4,000 lbs of food to the Barrie Food Bank after the Air Show. Instead of paid parking spectators were asked to bring a non-perishable food donation. Thanks to community participation, the food drive will help feed about 400 families in Barrie and the surrounding area.

The event was made possible thanks to generous sponsor support. Along with presenting sponsor, BMO, Personnel Support Programs (PSP) at CFB Borden would like to thank supporting sponsors: