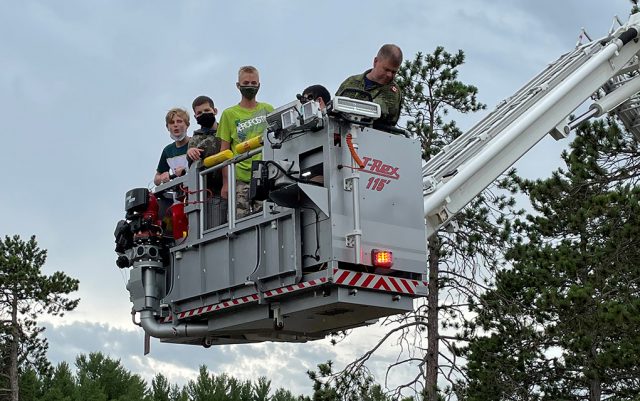 Cadets training at Blackdown Cadet Training Centre, had the opportunity to ride the aerial to get a view of the grounds at CFB Borden on July 28, 2022. (Photo credit: Lt Rebecca Menkveld)

Cadets undergoing training at the Blackdown Cadet Training Centre and cadets of the Cadet Activity Program (CAP) at CFB Borden have had the opportunity to get familiar with firefighting equipment thanks to the help of the Canadian Forces Fire and CBRN Academy at CFB Borden.

Throughout the summer the Canadian Forces Fire and CBRN Academy has been inspiring cadets by showing them equipment, and apparatuses. Cadets have also been able to ask questions and learn more about firefighting from candidates and instructors.

“It’s fun to be able to show cadets what it’s like, the tools, and how we operate,” says Aviator Jordon Larose, candidate at the academy. Aviator Larose was one of the members of the academy that came out to show cadets on the CAP how to operate the fire hose.

Other cadets were able to go up in the aerial and explore other parts of the firefighting vehicle. The Canadian Forces Fire and CBRN Academy also welcomed cadets from the Survival Instructors Course to the academy to see the different decommissioned vehicles they use to train for performing rescues. Cadets were then taken to see the smoke house firefighters use to train for fighting building fires.

“It’s a great experience for us as cadets to familiarize ourselves with trades in the Canadian Armed Forces” says Cadet Chief Warrant Officer Quintin Harriman from the Blackdown Cadet Training Centre.