A group of Canadian Rangers from the Far North of Ontario have completed a unique 750-kilometre voyage by freighter canoe from Parry Sound to Ottawa in recognition of 2022 as the Year of the Ranger.

“This mission has been an outstanding success,” said Major Charles Ohlke, the expedition leader.

The Rangers, who are part-time army reservists, were founded in 1947 and serve in remote and isolated communities across the Canadian North. They are celebrating the 75th anniversary of their founding.

There are 600 Rangers in 29 First Nations across the Far North of Ontario. The crews that made up the Parry Sound to Ottawa trip were 32 Rangers from 15 of those remote communities. They travelled in canoes from Fort Albany and Kashechewan, two First Nations on James Bay. The 24-foot craft, powered by outboard engines, travelled to Parry Sound along river routes and did a similar trip at the end of the celebratory mission. They travelled a total of 1,650 kilometers.

In Ontario the Rangers save lives in search and rescue operations, assist in forest fire and flood evacuations, help prevent suicides, and provide support in other emergency situations. They run the Junior Canadian Rangers, a successful army youth program for youth aged 12 to 18.

“I am proud of my Rangers and everything that they have accomplished up North and during this exercise,” LCol McArthur said.

During the 13-day, 750-kilometre voyage from Parry Sound to Ottawa the Rangers boated across Georgian Bay, along the Trent-Severn Canal, Lake Ontario, and the Rideau Canal, before reaching the Ottawa River. Two of the 88 waterway locks they passed through were the Peterborough Lock and the Big Chute Marine Railway, near Port Severn. At 65 feet, the Peterborough lock is the highest hydraulic lock in the world. Big Chute is almost as high.

“The Rangers had an amazing time,” Maj Ohlke said. “They live in the wilderness of Northern Ontario and in a lot of cases they had never seen a lock or a buoy before. All of this was a great new experience for many of them.”

“The stuff I’ve seen on the rivers, the locks, the different canals, is very different from up North,” said Master Corporal George Edwards from Fort Albany, a remote community on James Bay, 975 kilometres north of Toronto. “This is the first time I’ve done anything like this in my life. I was in shock when we got to Big Chute. I was nervous at going so high.”

“I’ve had a fabulous time,” said Master Corporal Jean Rabbit-Waboose of Eabametoong, a remote Ojibwe community 370 kilometres north of Thunder Bay. “It has been an adventure. When I get home I’ll say I had a really amazing trip and I learned a lot of new stuff that will make me a better Ranger.”

Apart from being an enjoyable experience the trip was an important training exercise, Maj Ohlke said, it taught the Rangers how to work together with Rangers from different communities and travel safely. It was also an opportunity to provide them with training in such things as first aid.

But it could not have been done without tremendous support from the staff of 3CRPG’s headquarters at Canadian Forces Base Borden.

“They did an outstanding job,” LCol McArthur said. “They showed an outstanding capability to organize, plan and execute a very complex mission. It took an entire effort by the unit to accomplish this.”

A support team of up to 11 soldiers travelled by vehicle to provide fuel, food, hot evening meals, and carry out repairs to the boats and engines.

The Rangers camped each night in tents alongside the waterways they were travelling on.

One of the biggest challenges the Rangers had was complying with frequent speed limits of 10 kilometres an hour. In the northern wilderness they typically travel at 20 to 30 km/h. The slower speeds allowed them to talk with curious spectators and other boaters.

“Their interactions with people was awesome,” LCol McArthur said. “People lined up to ask them questions. We purposefully came south so we could have the opportunity to interact with ordinary Canadians who would not otherwise know who we are in Northern Ontario and what we do up there.”

“The Rangers of Northern Ontario have provided years of outstanding service to Canada.”

Sergeant Peter Moon is a Ranger with 3CRPG at CFB Borden. 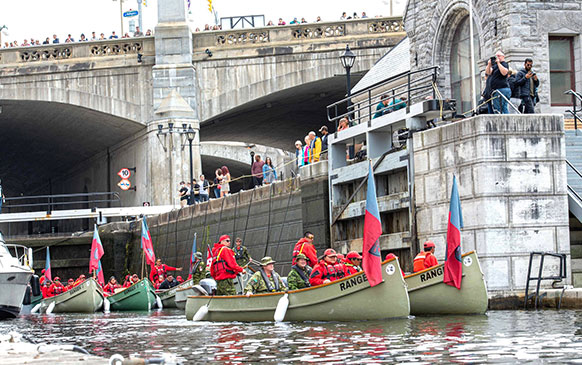