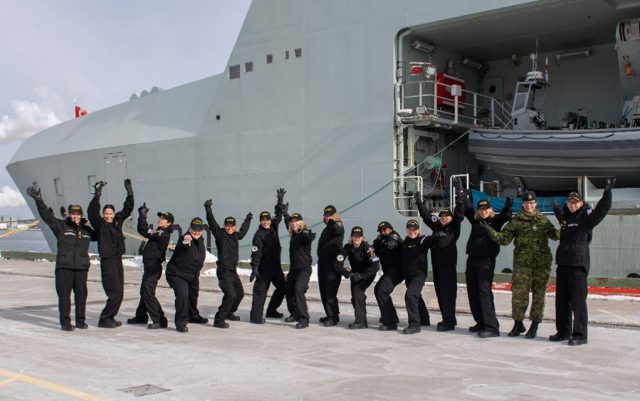 The participants of this year’s International Women’s Day Canadian Leaders at Sea program on the jetty in Halifax. Docked behind them is one of the RCN’s new Arctic and Offshore Patrol Ships. (Photo: The Maple Leaf)

A group of Canadian women had the experience of a lifetime to mark this year’s International Women’s Day, sailing on board a Royal Canadian Navy (RCN) Artic and Offshore Patrol Ship.

As part of the Navy’s Canadian Leaders at Sea (CLaS) program, women leaders in diverse fields such as business, academics, government and the volunteer sector from across Canada participated in a series of activities over three days, culminating with the chance to experience what our sailors do on a daily basis while at sea.

This “was an epic experience that helped me not only better understand the ‘why and what’ of the RCN, but also the ‘who’,” said Miin Alikhan, a healthcare executive.

This year’s International Women’s Day theme was Women Inspiring Women – a theme that was embraced during the entire CLaS event.

“I am truly humbled and awestruck by the integrity, personal stories and incredible commitment of those who do far more than we could ever comprehend to serve and protect us – not just in combat but also in naval diplomacy, deterrents, counter-narcotics, and piracy and humanitarian aid all over the world,” Ms. Alikhan said.

The CLaS program was held on board HMCS Harry DeWolf with Covid safety protocols in place to keep everyone safe. Vice-Admiral Craig Baines, Commander of the RCN, Rear-Admiral Rebecca Patterson, Commodore Josée Kurtz and Chief Warrant Officer Shelley Lamothe joined them for a short period of time.

“Commodore Kurtz challenged us to describe what we learned in one word, (but) I can only narrow it down to two: inspiring and authentic,” Ms. Alikhan said.

“It was a true pleasure and treat to meet some outstanding Badass Bosses who are genuinely lovely people at their core,” said Seyi Okuribido-Malcolm, Deputy Director of Gender, Diversity and Inclusion at the Department of National Defence. “I have a deeper insight and appreciation for our sailors at sea.”

Many of the participants were chosen to take part in 2020, but had to reschedule because of Covid-19 restrictions.

Within the RCN, International Women’s Day celebrates the talent, dedication, leadership and sacrifice its female military and civilian members demonstrate every day, inspiring women and girls here at home and the world over.