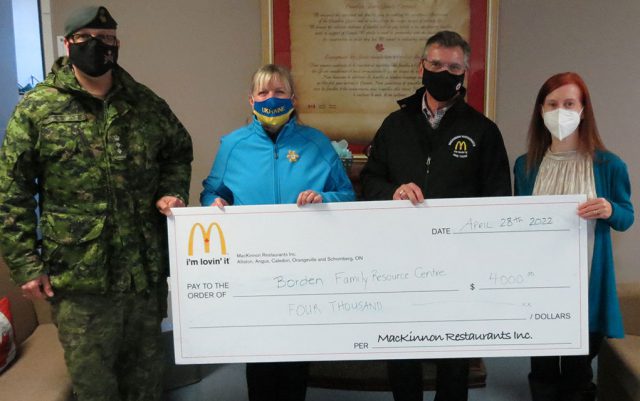 Rory MacKinnon, owner of the McDonald’s in Angus and Honorary Colonel at the RCAF Academy presented a $4,000 cheque on Thursday April 28th to Line Sorel, Executive Director at the Borden Military Family Resource Centre (BFRC). In attendance was the CFB Borden Commander, Colonel Daniel Rivière.

The first McDonald’s in this area opened on CFB Borden in 1982. Throughout their history here, McDonald’s’ has been a large contributor to the Base Borden community, and to the BFRC in particular.

“We have deep ties to the military families that support the Base and we thought a fitting way to recognize this was to do a McMuffin Sandwich fundraiser to raise awareness and essential funds for the MFRC”, said MacKinnon.

$1 from every Egg McMuffin sandwich from March 7th to the end of April was donated to BFRC programming at Borden.

“McDonald’s remains committed to the CFB Borden community and is proud of its legacy,” MacKinnon said. “We look forward to [continuing] to deepen our involvement in the future. McDonald’s remains a proud member of the CF Appreciation program.”

The Centre is extremely grateful for this very generous donation and appreciate the McDonald teams’efforts.