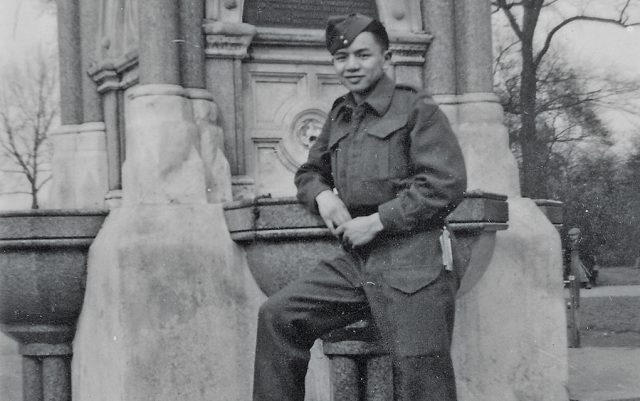 Second World War veteran Gordon Quan, 96, has an intriguing story to tell, one that includes top secret work in Southeast Asia in the final months of the war.

He underwent Basic Training in Saskatchewan and was then dispatched to England for training by the British Secret Service. Quan and other Chinese Canadians joined Special Force 136, a branch of the British Special Operations Executive.

Chinese Canadians were deemed the perfect recruits to fight against the Japanese because they could blend in with local populations, and understand some Southeast Asia languages, says Quan.

In 1945, with the war in Europe already over, Special Agent Quan worked as a secret agent in Malaya, Burma, and India. His mission was one of sabotage against Japanese imperialist forces using his training in demolition.

“We were trained in small groups of 15 in how to be effective and how to destroy and disrupt supply lines, fuel depots, ammunition dumps, transportation networks, and other Japanese controlled infrastructure.”

His service lasted only a few months before the war with Japan drew to a close following the bombing of Hiroshima and Nagasaki. Quan believes the use of the H-Bomb was a necessary evil of war.

“When the Americans used this weapon on Japan it gave us the opportunity to survive,” he says. “The world would have been changed completely if the Japanese and Germans maintained their control.”

He has few clear recollections of his experiences as a secret agent, and many more he doesn’t want to remember.

“It really boiled down to a case of kill or be killed, so that’s why remembering or thinking about these moments can often be difficult,” he says.

Quan was discharged from the military in 1946 and returned to Victoria. He underwent vocational training with the help of Veterans Affairs in auto mechanics and heavy-duty mechanics. Later, he landed jobs in private construction and the City of Victoria Public Works Department and says he was the first Chinese Canadian to work there.

He also continued his service in the military for the Army Reserves from 1952, rising to the rank of Sergeant Major before his retirement in 1983.

During this time, he served the 40th Technical Squadron as a craftsman, the 155th Royal Canadian Army Service Corp, and later the 39 Service Battalion.

He credits this military experience too much of his success following the war. 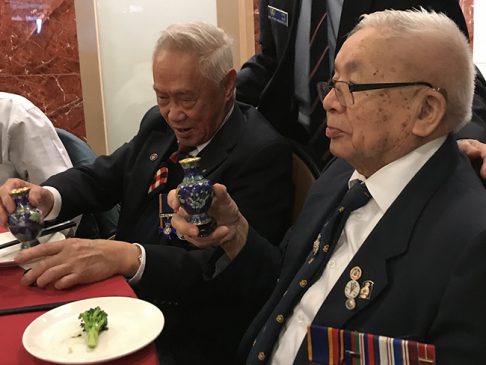 “My military involvement gave me a lot of opportunity, and education to learn a trade. If I didn’t have that training I never would have landed a job with the City of Victoria. I always believed back then the military turns boys into men.”

His five children, three sons, and two daughters; five grandchildren; and five great grandchildren who make frequent visits to see him at his Victoria home.

He is a lifetime member of the Royal Canadian Legion, previously serving as Sergeant-at-Arms of the Pacific No. 7, and the Victoria Chinese Canadian Veterans’ Association.

In 2012, Quan was part of a National Film Board of Canada documentary Operation Oblivion that tells the story of 13 Chinese Canadians recruited to Force 136. His story is also featured in an exhibit at Vancouver’s Chinese Canadian Military Museum entitled Rumble in the Jungle: The Story of Force 136.