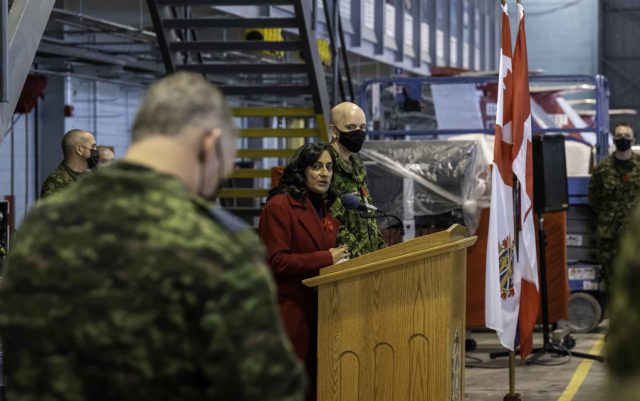 CFB Borden and 16 Wing recently hosted the Minister of National Defence (MND), the Honourable Anita Anand (MP Oakville) for her first visit to a Canadian Forces base while serving as MND. She was joined by the Acting Chief of Defence Staff, General Wayne Eyre for a VIP tour of select units on Base.

“My top priority as Minister is ensuring that our personnel are safe, protected, and respected. This means that I will continue working hard with you to change the culture within our military, which I believe is our greatest challenge at the present time,” said Minister Anand.

General Eyre emphasized the importance of embracing diversity and inclusion within the CAF.

“As a force, the CAF needs to be able to attract, retain and develop talent from all segments of Canadian society but also to ensure our future operational relevance,” said General Eyre. “Members are entitled to have a safe and welcome environment where they can contribute to the very best of their abilities.” 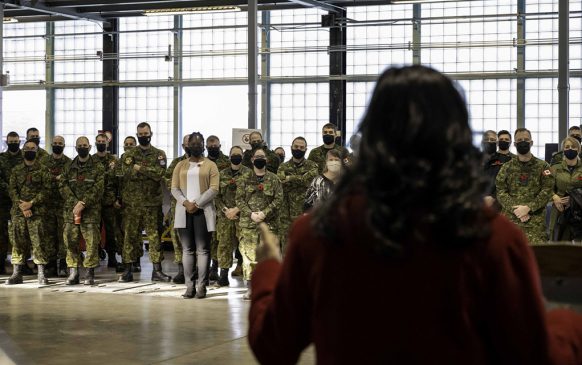 CFB Borden is the birthplace of the Defence Team Pride Network, and home of Defence Advisory Groups including Indigenous, Women’s, Persons with Disabilities, and more. Events that celebrate diversity and inclusivity are a regular occurrence, giving members, civilian Defence Team employees and military families the opportunity to learn and grow together.

“The tour of CFB Borden gave me the opportunity to connect with members of the Canadian Armed Forces and discuss issues like recruitment, housing and mental health supports in our military,” said Minister Anand. “I want to assure members that General Eyre and I will be working hard to address the issues raised to us in our town hall meetings and over lunch, and I thank everyone who participated in our frank, meaningful conversations. Our people are at the heart of our Canadian Armed Forces, and you are first and foremost in my mind.”