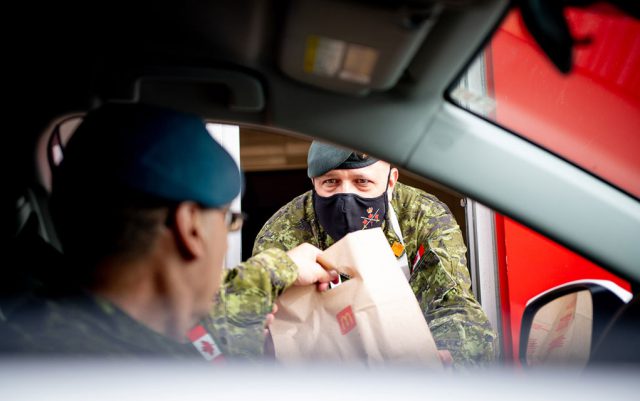 CFB Borden’s Command Team was on site at the Angus McDonald’s to help serve meals on McHappy Day, 11 May. Half of the proceeds from the 28th annual coast-to-coast fundraiser go directly to Ronald McDonald House charities, while the rest is donated to local children’s charities, including the Borden Military Family Resource Centre and Stevenson Memorial Hospital Foundation.

Thanks to community support this McHappy Day, the Angus McDonald’s was able to donate $1,500 to the Borden Family Resource Centre.

“The Borden MFRC has been our charity of focus throughout the time that McDonald’s has been on Base,” said Rory McKinnon, owner of the Angus and Alliston McDonald’s and Honorary Colonel at the RCAF Academy. “Ronald McDonald House is a family charity, and the MFRC does a lot to support military families, so there’s a great synergy there.”

The one-day event raised more than $5.7 million across Canada. This year, two of Canada’s most notable landmarks, Niagara Falls and the CN Tower were lit up in red and yellow to commemorate the day.