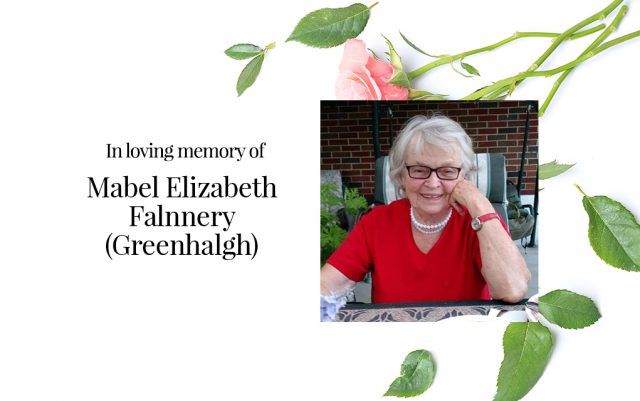 It is with great sadness that we announce the passing of Mrs. Mabel Flannery, in her 92nd year. Mabel passed away at 03:30, on the morning of January 1st, 2021, at the Royal Victoria Hospital, Barrie, Ontario, as a result of complications resulting from a stroke.

Mabel was born, August 17th, 1929, at the Salvation Army Home in Ottawa, and raised in the area of Pembroke, Ontario, where she met and married her husband of 25 years, John Flannery, a soldier in the Royal Canadian Armoured Corps. A Tireless and dedicated military Spouse, Mabel lived and travelled coast to coast in Canada, and in Germany, raising her three children, often on her own while making beloved friends everywhere she went. She finally settled down in Angus, Ontario, working in the Officers’ Mess at Canadian Forces Base Borden, until retirement after which she relocated to Barrie.

Mabel is survived by her adoring life-partner of 25 years, Arnold William Keuhni, also of Barrie, originally from Restoule, Ontario.  She is also survived by her children: David Flannery and daughter-in-law Sherry, of New Lowell; Kathryn and son-in-law John Richmond, of St. Catharines; and, Heather Flannery of Toronto; and by her grandchildren: Paula and John Bertrand of Edmonton; Bradford and Jennifer Richmond of Calgary; Paul Flannery of New Lowell; Michael Richmond of St. Catharines; and Samuel Richmond of Calgary; as well as her four great grandchildren: Zachary, McKenna, Kaydin and Jax.

Arrangements entrusted to the Steckley-Gooderham Funeral Home, 30 Worsley St., Barrie. Online condolences and memories may be left at www.steckleygooderham.com

Full of life and vigor, a vibrant, caring and giving lady, her unmatched energy and zest for life will be remembered by all who knew her.