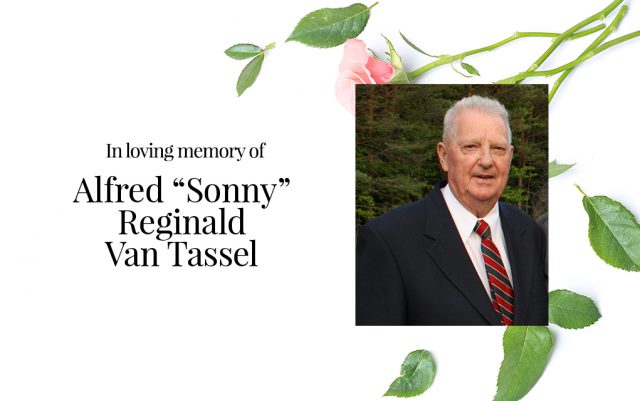 It is with great sadness that we announce the passing of Sonny Van Tassell on January 23rd, 2021 at the age of 86 to COVID-19.

Sonny was survived 1 day by his beloved wife Beverly Joan Moffatt. He is predeceased by his son David and granddaughter Lynn; brothers Gerald, Burgess, Warren and sisters Sharon and Diane. He is survived by his sons Terry, BC and Mark (Donna), ON and daughter Julie (Janet), NS; his grandchildren Tammy, Cathy, Cindy, Catrina, Natasha, Sonny and Loreal; 8 great grandchildren and 9 great-great grandchildren. He is survived by brothers Lovett and Jerry and by his sisters Jean, Carol, and Sheila as well as many nieces and nephews. Sonny was retired from a long military career, which he then continued as a civilian at Base Borden. His retirement found him, with his wife Bev, travelling in search of new golf courses. Sonny was an avid golfer throughout his life where he and Bev entered many tournaments, both together as a pair and separate. He enjoyed time with his family and friends, remaining physically active right up to his death.

Cremation has already taken place and a family gathering will be held at a later date. In lieu of flowers, donations can be made to the Canadian Legion or to the OSPCA. A special appreciation goes out to all the nurses and doctors who are trying to combat this virus. You are true angels. You are there when we can’t be.