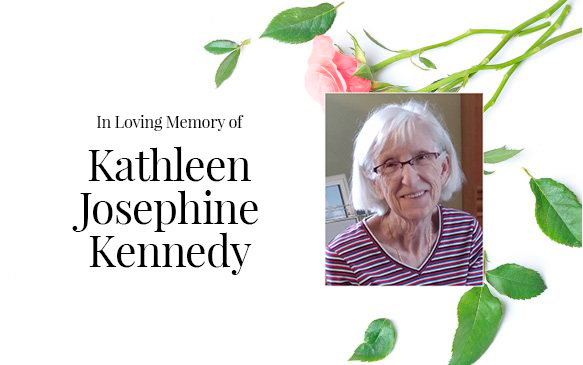 It is with great sadness that we announce the death of our mother, Kathleen Josephine Kennedy, who passed peacefully away aged 85, on September 26, 2022. Born in Renews, NL, she was the last surviving member of her immediate family.

Kathleen worked for the city of St. John’s for a short time. She returned to school in 1978 and graduated with a Diploma in Stenography from Georgian College, Barrie Campus.   As a military wife she moved with her husband to various places. She had a long career with The Royal Canadian Dragoons at CFB Gagetown where she worked for many years as an Administrative Assistant to the regiment, she was highly regarded for both her administrative skills and sense of humour. She and Albert eventually retired to Burton, NB, where they built a lovely homestead.

Kathleen enjoyed gardening, reading, discussing politics, crocheting and baking; but mostly she enjoyed spending time with her family. She will be dearly missed by her family and friends.

We would like to thank the staff at Paradise Villa, Tranquility Lane, for the care she received while living there. And thank you also to Hospice House for their kindness and care in the final day of her life.

The family will receive visitors at the Oromocto Funeral Home, 108 Winnebago Street, Oromocto, NB, on Thursday, October 6, 2022, from 2 to 4 pm. A Mass of Christian Burial will be celebrated at St. Vincent de Paul Roman Catholic Church, Oromocto, NB, on Friday, October 7, 2022 at 11 am with Father Charles Udeh as celebrant. An interment will take place in the St. Vincent de Paul cemetery immediately following the funeral mass.

In lieu of flowers, donations to the Alzheimer Society of NB, Hospice Fredericton, John Howard Society or a charity of your choice would be gratefully accepted. Online condolences may be left at www.oromoctofh.com.

Eternal Rest grant unto her O Lord and let perpetual light shine upon her. May she rest in peace. Amen.